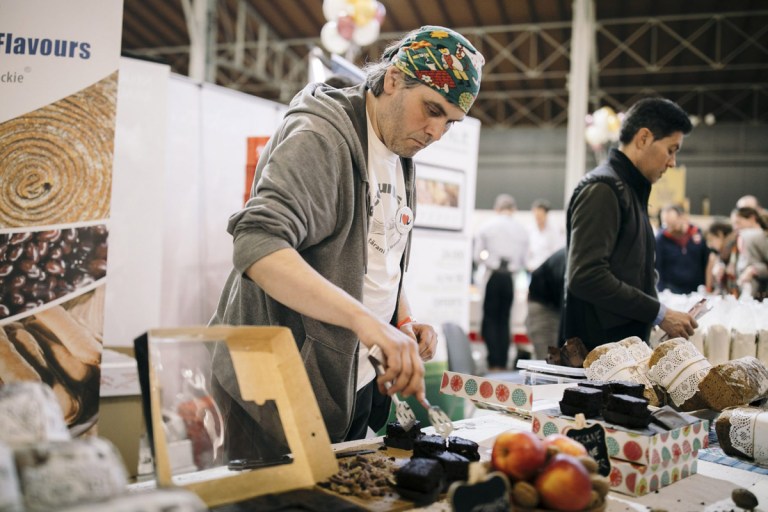 An artisan baker of sourdough breads and pastries. I have explored different types of collective action with varying degrees of success.

I started baking ten years ago as a challenge to myself. It seemed everybody was cooking, but very few were baking. I made my first bread with yeast, but from searching on the internet I discovered sourdough – or wild yeast, and fermented fruit to use as a raising agent instead. In 2010 I went to a small village in France and to volunteer with an English baker – baking 100kg of bread per day three days a week. There was no mixer, it was done entirely by hand and cooked in a wood-fired oven as it would have been hundreds of years ago. I came home with the idea to do the same thing in rural Romania. My wife and I bought two acres of land and lived in a caravan for three months with our two young children while the ruin of a house was repaired. Thankfully it was not a cold winter that year! In 2012 I became the first producer of a new collective project called ‘The Peasants Box’ delivering my breads to households in Cluj every Friday for four years. Alongside I started workshops to teach others how to bake bread or pizza. I felt it worked better for me to teach people how to bake their own bread rather than me baking it and delivering it for them.

I also use a small part of my land for multiplying the ancient seeds of wheat and rye from all over the world.

I have a connection with Eco Ruralis since we moved to the countryside. In 2016 they hosted the Nyeleni Forum Summer Camp. We baked for 800 people in four days, using our methods. Events like this where people can taste my breads, are very useful. My main helper for this event was from Wales. He has since set up his own bakery. We also exchange seeds with each other. Basically, whoever I meet I try and exchange a handful of seeds with them!

We do a lot of workshops locally in the summer because where we live: Rau Alb at the base of the Rezetat mountains, is a tourist area. In the autumn and spring, I train people and even other bakeries in other cities in Romania.

I’ve started using apples and plums from the trees on my land to sweeten my brownies for my other label: Mr Brownie. I also keep some sheep as pets – they mow the grass and fertilise the ground. I shear them for wool in April and wash it through the summer.

I don’t operate any formal collaboration. If people are interested in my methods and my story, I am happy to tell them.

“I don’t operate any formal collaboration. If people are interested in my methods and my story, I am happy to tell them.”

Working with The Peasants’ Box became tiring after a while. It’s 200km from where I live, and the response of the people was not always what I expected it to be. At the beginning everybody was excited, but they don’t always appreciate what goes into artisan bread – they question why it’s more expensive than the supermarket. People are not educated about sourdough.

I need to explain my methods, my ingredients, and tell them my story. Eventually they understand, but this is easier to do in a workshop than on the doorstep with a box delivery. You have more time in a workshop and are talking to people who are already interested.

I’ve heard from other countries that have similar box projects – it works well with vegetables, but not with other things, so I was not a particular case. It was good to try, but also better for me to leave. Now my co-operation is less organised. I connect with other seed savers and those interested in my baking methods but there is no governance. I am in control.

I don’t think Social Media is that helpful. For this type of product, you need to smell it and taste it. When my children lived at home, they took care of my online presence, but I’m old school – I prefer face to face contact.

I’m self-educated. It’s best to learn from other people’s mistakes, but sometimes you can only learn from your own mistakes. I don’t have much expectation. I don’t get disappointed by people or things. Whatever happens, I’ll take it – at least that’s how I’m trying to be.

“I’m self-educated. It’s best to learn from other people’s mistakes, but sometimes you can only learn from your own mistakes.”

I don’t have regrets. I cannot go back to the city, now. I stay outdoors for most of the day, rather than in an office. I’m used to it now. It’s quiet, apart from the sheep. It’s like a therapy.