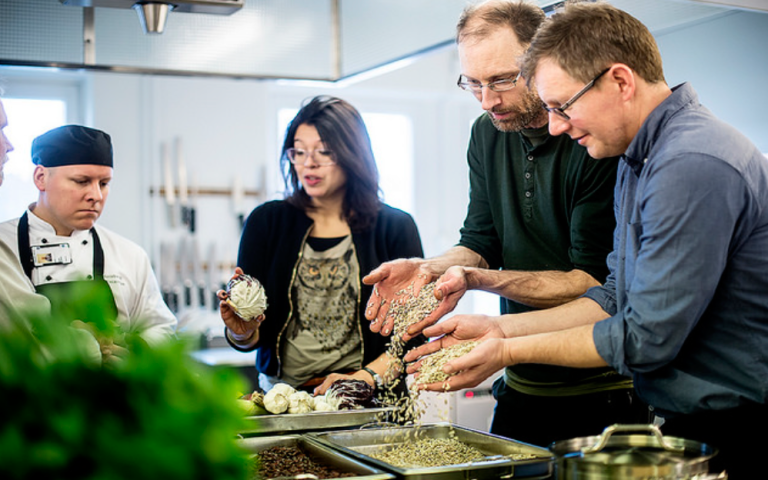 The creation of a menu within the public food sector for a tasty and healthy diet that the earth can sustainably produce. Using a holistic approach to the food system of a particular location, meals are cooked mainly from raw organic ingredients sourced from ecological regenerative agriculture. Most of the food is seasonal and locally sourced and very little is processed. The menus typically feature highly nutritious vegetables, wholegrain and legumes, and fewer animal products. Another aspect is reducing waste within food production, especially wholesale – for example using meat from formally egg-laying hens.

Name of the initiative? Diet for a Green Planet

The Baltic Sea is one of the most polluted in the world, mainly from phosphorus and nitrogen deposits leaking into connecting waterways from agricultural use of pesticides and fertilisers. Sweden also imports a lot of anonymous meat and other food. When it comes to our national food supply, we are very vulnerable. In 2001 a Green Party majority in Södertälje Municipality formulated some food goals to reduce pollution and improve sustainability in the public food sector. Initially they set a goal for all milk potatoes bread and eggs to be organic. The municipality also allocated a budget for a new Diet Unit that could devise a regional food policy focusing on nutrition, sustainability and quality. I became head of the Diet Unit in 2004 and oversaw this document.

“I collaborated with the politicians asking what we can do with existing resources. I made suggestions: some they liked, some they didn’t! Some ideas we created and developed together.”

Since then I collaborated with the politicians asking what we can do with existing resources. I made suggestions: some they liked, some they didn’t! Some ideas we created and developed together. Over the years we have come up with a number of activities connected to how we can support sustainable food production and consumption. I spent three years putting together a policy document they were happy with.

Once the policy was accepted, we educated the catering staff in the various canteens and restored a lot of kitchens.
We brought the organisation of all the meals under one roof. This gave me control over the purchase and quality of food production.

I worked with local food producers, with the staff of the various public catering units and I worked closely with the Environmental office that regulate hygiene in kitchens. They advised me what improvements were necessary to make kitchens fit to produce safe food.

Copenhagen helped us create a concept of Diet for a Green Planet specifically for our municipality, and we worked closely with them for a time.

“Södertälje Municipality are concerned with working broadly with other parties. They recognise the need to work with the question of sustainability cooperatively involving all relevant actors.”

Södertälje Municipality are concerned with working broadly with other parties. They recognise the need to work with the question of sustainability cooperatively involving all relevant actors. By creating a specialised Diet Unit, the project became well embedded in local government so even though the political make-up of the government in Södertälje has changed, they still support what we are doing.

We had an existing structure for policy making: a number of boards have to look at proposals. It can be a slow process and some city servants may neglect these boards if they don’t give an answer or your item doesn’t make it on to the agenda. I always followed everything up, calling the head of the board if I didn’t get a reply. Things were delayed and delayed sometimes, but this was a very important process.

The organisation wasn’t well adapted to manage the end goals of the policy – for example we needed to have fully-equipped internal kitchens ideally on each unit, so I began an investigation into the kitchens and the competency of the staff, including the status of their own health. I applied for a development project in order to train the staff. Writing the policy, my investigations and training the staff all overlapped. I was very busy!

When Sweden became a member of the EU, the politics changed so food began to be produced where it is cheapest and infrastructure around food in Stockholm disappeared. We are trying now to work with the city planning office and the business office in the municipality as well as the regional county council to rebuild this infrastructure. In 2015 EU-project MatLust started with the goal to develop a sustainable food supply in Stockholm County, as well as creating a regional food hub in Södertälje

It took three years to write the policy document because I saw the value of involving as many actors as possible so that when the policy was ready people would already know about it and feel ‘this is my document; I can use it’. The involving process was a great challenge, but the document has been great success. It was worth giving the time.

The involving process was a great challenge, but the document has been great success. It was worth giving the time.

We found in most cases it was cheaper to have an internal fully equipped kitchen with a well-trained chef than incompetent lower paid workers heating up processed meals.

By offering a choice of options each mealtime including soup, kitchens can plan their own menus by using what has been left over in their storage. This reduces waste.

Södertälje’s public sector diets have positive impacts on health, climate, biodiversity and land use. We have received several awards, most notably ‘The school meal-municipality of the year’.