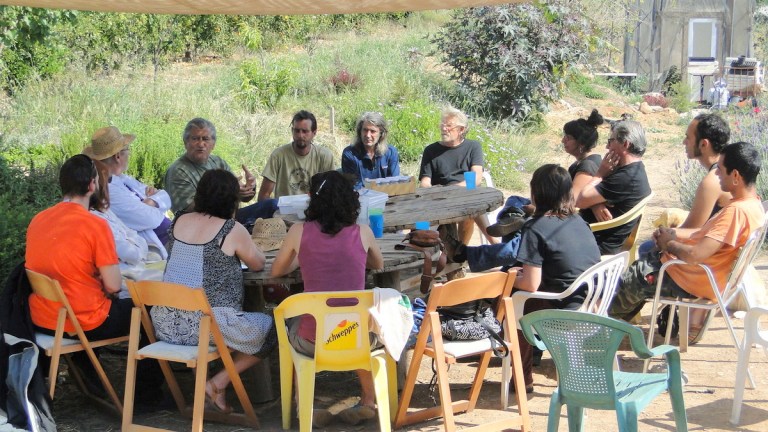 Quality guarantee systems that operate locally. Producers are certified based on the active participation of actors and are built on trust, social networking, and knowledge sharing.

As a group of organic farmers, Ecollaures was born in 2009. Initially we united with the intention of sharing products, agreeing on common prices, and mutually supporting each other – betting on collaboration rather than competition.

“Initially we united with the intention of sharing products, agreeing on common prices, and mutually supporting each other – betting on collaboration rather than competition.”

After The Food Sovereignty Platform in 2011 and learning about examples of PGS (Participatory Guarantee System) in Andalusia, a group emerged motivated to build something similar in Valencia. Coming from a sensitised and politicised group, the agro-ecological and holistic component of the PGS-Ecollaures was to be expected.

“Coming from a sensitised and politicised group, the agro-ecological and holistic component of the PGS-Ecollaures was to be expected.”

Initially we connected with experts and other PGS collectives, who advised us on operating protocols and criteria that we could adapt to our needs. Next with other people who helped us in matters of facilitation and internal relations, at the same time we connected with new channels of supply and administrations in order to have recognition and visibility in our territory.

Some of the members of the Ecollaures collective, with other non-members, joined in an initiative where the producers themselves organise, visit and collectively credit the quality of their products. This initiative has been around for a while, but the incorporation and participation of consumers in the process and, more specifically, the existing organised consumer groups in Valencia, was something new. It’s an important addition because it provides greater transparency and seriousness to the certification mechanism. It has increased the quality of the associated profiles, with the incorporation of social organisations and NGOs related to Food Sovereignty, sustainability and justice in food matters.

We have been able to work together because internally we find common needs at different levels (production, training, sale, visibility, territorial defence, environmental protection, struggle for decent work) ultimately we share a common goal of improving our society through food. Externally we find support from other allied organisations and a growing social awareness of quality nutrition.

“…ultimately we share a common goal of improving our society through food.“

First and foremost, we needed to work horizontally and assembly while at the same time moving forward and seeing tangible results. At first the assemblies became very long and tedious. To overcome this, we trained in techniques and tools of facilitation, which improved efficiency in arranging meetings and making decisions.

Second, we could discuss the challenge of coping with internal conflicts that may have arisen along the way, such as when making decisions about projects that did not meet certain criteria or agreed upon standards, which is complicated when one collective wants to be more supportive than a group with a punitive attitude. This challenge has not been completely resolved, but it is doing well with the creation of an internal tool, such as a care commission, bringing coordination to these situations and proposing ways to manage them collectively.

Another challenge has been knowing how to respond to when projects leave the group for various reasons, especially those which have been referents or have played an important role or task. At the same time new projects have entered the collective that did not have the knowledge and tools of the rest, and this has created a challenge when it comes to moving towards the same goal. As a tool, we have decided that an experienced project within the collective will ‘welcome’ new ones in spaces other than assemblies or commissions.

“…living the process and having persistence generates fruits that generate collective satisfaction, which is much greater than individual satisfaction.”

Sometimes, when you start something from scratch, you have many dreams and aspirations, and although it seems that it is far away, living the process and having persistence generates fruits that generate collective satisfaction, which is much greater than individual satisfaction.

“…relating and caring for ourselves is fundamental in collective processes.”

We have also learned that relating and caring for ourselves is fundamental in collective processes. Although they are projects with a political objective, the human part is basic, and this must be taken care of. It is even advisable to set aside or postpone some objectives to prioritise the human part.

“It is even advisable to set aside or postpone some objectives to prioritise the human part.”

At the territorial level, the level of knowledge about the ideas and dreams we had at the beginning related to sustainability, justice and social transformation has increased. The community has permeated all of this.

At the individual level, it has meant feeling that it is not an individual matter, but something familiar. Feeling that you are part of something collective – feeling accompanied.