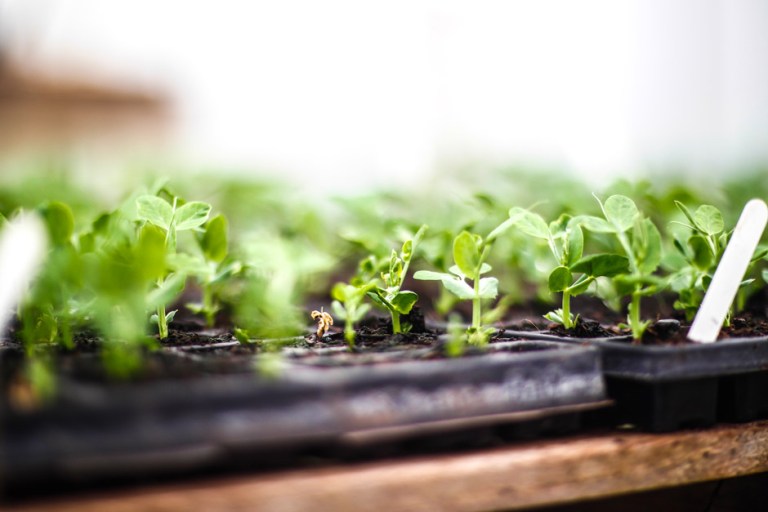 Name of the initiative? Edible Futures

I came from a political environmental perspective rather than being into gardening or having land skills. I believe in changing our food system.

I started in 2010 on a very small smallholding with an edible perennial nursery. The plan was not only to sell plants but do edible landscaping around Bristol in schools and parks. As we had some spare land, I began cropping some annual plants and selling them too. Over time the latter became the focus and the former waned. The access to the land was poor and it was the wrong end of town so in 2013 I moved to the current larger site and set up as a market garden.

Initially I visited restaurants and talked to the chefs and a high-end grocer – most of them are really clued up – interested in the farming and agroecology behind the produce.

I’ve massively benefitted from being a member of the Landworkers’ Alliance. Being involved in their different campaigns and actions, I’ve got to know other people doing horticultural projects and those with various skills in agroecology who can recommend different techniques, books to read, even inviting me to their farms. This has been a very influential social network for me as a grower.

The project received several small grants to help with infrastructure such as putting up polytunnels and building a packing shed that we co-use with Sims Hill (a local permaculture vegetable grower). Once I was supplying around ten friendly local restaurants with salad, I began incorporating a CSA style salad drop directly for households. It makes my economic system more resilient. The restaurant trade has a big spike in the summer followed by a lull in August, which is problematic. They wouldn’t support the project when I’m not producing. With the salad drop, members pay monthly for twelve months and receive salad 44 weeks of the year.

The salad drop is mainly to friends and friends of friends. In 2016 I did a talk in Triodos Bank (a big employer of alternative-minded people in Bristol). I offered a regular salad drop to the bank and 20 new people signed up right there and then. I haven’t had to do much since in the way of marketing since.

“Edible Futures is part of this bigger social movement, it’s not only given me input and influences, but it’s made the whole thing inspiring and exiting. Teaming up and collaboration is key – in a way that’s broader than the farm, more about politics and social transformation.”

In Bristol demand is definitely outstripping supply. We have a network of producers, buyers, processers and campaigners who understand the value of agroecologically produced food. For me, Edible Futures is part of this bigger social movement, it’s not only given me input and influences, but it’s made the whole thing inspiring and exciting. Teaming up and collaboration is key – in a way that’s broader than the farm, more about politics and social transformation.

Initially my biggest challenge was not being skilled enough at growing – improving skills is a life-project. Networking with other growers, reading and practice means I have improved enough for Edible Futures to be functional. It’s mostly been a one-man-show. Various people have come and gone. It’s not ideal, but it’s the way it’s gone thus far. Currently I have a friend who has worked as a seasonal labourer for two days a week for the last six months.

The big challenge now is economic: it’s very difficult to make enough money even with direct sales of food, to cover the cost of living in the UK. That’s why direct sales are so important. I could expand. I could do more talks in places like the offices of the Environment Agency and The Soil Association to increase my salad drop members, but I’ve not needed to. I know people who’ve scaled up, but their costs increased too. There’s an old Parisian dictum from the Victorian era: ‘the person with the smallest amount of land makes the most money’. It’s worth bearing in mind. I’m cropping off under an acre so although I work really hard in the summer it is essentially a part time job. It’s also low risk, because I don’t have a tractor or other machinery to maintain. Farming on this scale, I can supplement my income with another part time job.

I value building great relationships with buyers. The salad drop works because we have drop off points. There is no way it would be tenable if I were cycling round to fifty people’s houses. We had four drop off points and have now gone down to three.

With a small amount of land, I’ve learned to chase the highest value crop possible. In the UK that’s salad. I only harvest it once it’s sold. It gets ordered on a Monday and I cut it on a Tuesday so there’s very little waste.

“Working outside is good for my fitness and mental health. It’s connected me to people I find really engaging and inspiring who are transforming the food system.”

Edible Futures has changed my access to really good food. I have the salad I’m producing but I also have farmer mates who produce bread, meat and dairy. Working outside is good for my fitness and mental health. It’s connected me to people I find really engaging and inspiring who are transforming the food system in a way I believe is valuable.