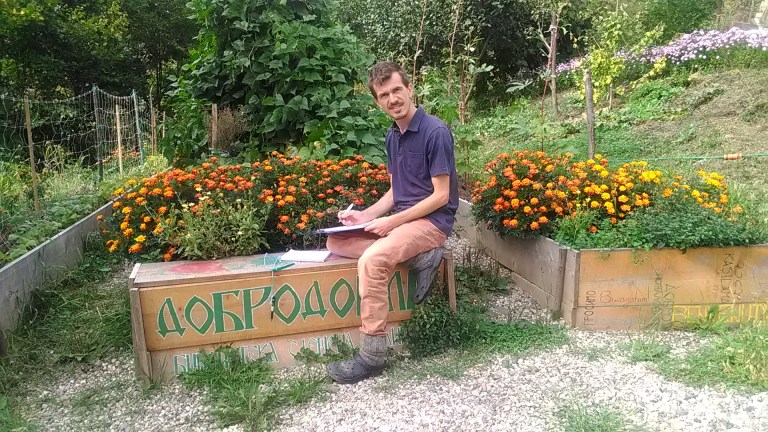 Name of the initiative? Factory of Joy

Since the end of the war in 1995, the people of Bosnia and Herzegovina produced less food themselves and used more chemicals in food production. As the market became more open, we could import what we couldn’t produce and export some of our products too. This is good. What is not so good is that our market has been flooded with foods and other products full of chemicals. Bosnian food and seed sovereignty as well as the natural practices of food production and home seed production has been dramatically eroded.

“As we lose traditional methods of farming, many heirloom plant varieties produced by our ancestors have disappeared forever.”

As we lose traditional methods of farming, many heirloom plant varieties produced by our ancestors have disappeared forever.

Heirloom plants are open-pollinated; they have grown for at least 50 years in the same environment and have retained all the ‘parental’ characteristics, remaining stable from one year to the next. They have developed strong defence mechanisms, making them highly resistant to climate change, potential diseases and parasites so they can be cultivated without chemicals. Cultivating them in the traditional ways regenerates and rebuilds the richness of our soils, strengthens our pure food sovereignty and contributes to the sustainability of peasants’ households. They are also more nutritious: traditional heirloom corn has on average 20-30% more protein than a typical modern variety of corn grown on the same soil. Preserving and protecting our nature isn’t enough, we need to nurture and develop it. Heirlooms are so important for this – so restoring and disseminating these varieties has become my urgent mission.

“Preserving and protecting our nature isn’t enough, we need to nurture and develop it. Heirlooms are so important for this – so restoring and disseminating these varieties has become my urgent mission.

I visited Croatia and USA learning from established heirloom seed initiatives, then returned to Čelinac, a small town near Banja Luka in northern Bosnia and Herzegovina, and spent four years working on the land. This became Factory of Joy.

“We began collecting heirloom varieties of seeds first from our cousins, then neighbours and local peasants, then later through national and international biological heirloom seed exchanges”

We began collecting heirloom varieties of seeds first from our cousins, then neighbours and local peasants, then later through national and international biological heirloom seed exchanges. We cultivated many varieties for seed production, monitoring their characteristics and preserving the best ones. These seeds formed Seed Bank which in 2017 we turned into Seed Library with aim to open our seed collection to everyone in need of heirlooms. Today our Seed Library holds 500 heirloom varieties of vegetables, flowers and medicinal herbs, as well as few cereals and fruits. Membership to the library is 15 Euros per year. This year we have 21 members, each receiving 15 varieties of seeds of their choice to cultivate and a few others selected by us, with an aim to inspire them to determine and describe new species and varieties. One of our team is available 24/7 to help them grow and propagate successfully.
Although it starts with the seeds, we now cultivate enough fruit and vegetables to feed my family and small team.

You can’t get organic food in the supermarket here, so those who want it are proactive in reaching out. We have been contacted by people from Banja Luka to supply food to them but for the time being we keep having to say no! Seed production is the priority. Although only 5-10% of our population have an interest in the importance of eating organically, this percentage is growing thanks to social media. Everyday we strive to show consumers that there are alternatives to the current unsecure main food system if we seek and ask for better food through direct connection with producers. We may not be able to supply it ourselves, but recently we’ve made a few small networks in Bosnia and Herzegovina connecting consumers with local producers of organic food.

This year we purchased a green house, with funds from selling seeds and a grant from the local agricultural ministry. This will enable us to extend our season of planting and harvesting. Once we’ve met bio food needs for our cousins, friends, neighbours and colleagues, we hope to be able to sell our surplus produce and heirloom seedlings, so in future we will be able to say yes to Banja Luka!

“In some ways Bosnia and Herzegovina has an advantage over more ‘developed’ countries – until the 1990s, most of our citizens had on their plates an abundance of locally on-farm produced highly pure food.”

It was very inspiring to witness through The BOND Project study tours in Spain examples of whole schools, kindergartens and restaurants successfully being supplied from the local and biological food producers. In some ways Bosnia and Herzegovina has an advantage over more ‘developed’ countries – until the 1990s, most of our citizens had on their plates an abundance of locally on-farm produced highly pure food. Our traditional practices and knowledge started to fade much more recently compared to many western countries.

Periodically we organise workshops and lectures on home seed preservation as well as natural and traditional methods of food cultivation. We also do activities with school children, raising awareness of heirloom and biological food cultivation and consumption ‘from small legs’ in our community. We are trying to educate people but at the same time we are learning because there is an endless field of knowledge and practices being lost.

“We are trying to educate people but at the same time we are learning because there is an endless field of knowledge and practices being lost.”

Financially, Seed Library is not self-sustainable. It takes a lot of time and people to maintain our work, but we believe better days in terms of financial self-sustainability are in front of us. Over time we have been educating our members and developing mutual trust: we have a shared ideology and enthusiasm around seed cultivation. It is my dream they will become a network of seed savers that hopefully become our cooperants for seed production. We have also begun reaching out to other bio-dynamic seed suppliers not too far from Bosnia. I aspire in the future to have real co-operation them and establish mentorship programmes and training.

Our market research shows we have made significant progress on the bio market development in in our region compared to last year. For this we can mainly thank our awesome and diligent crew, who are willing to work even with no money, projects like BOND, which gave us hope through living examples, as well as Arche Noah from Austria and our generous climate and soils here.

The future is growing our heirloom seed selling enterprise. Our aim is to be international – we already have orders from Austria, Slovenia and Germany – but first we need to make our first professional packages for the seeds and place them on the market. We hope and believe to get enough people and finances to accomplish this goal.