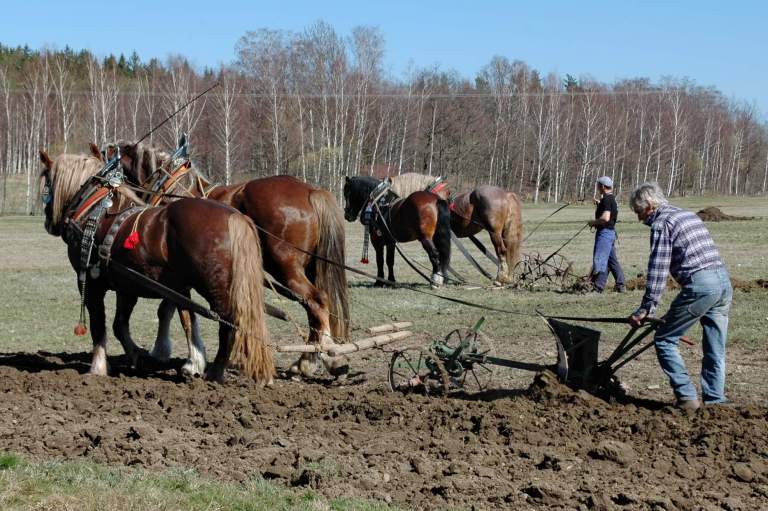 Gathering together those interested in modern horse-powered farming throughout the Czech Republic to share knowledge and experience.

Name of the initiative? Farma Lukava

Working horses are still used in logging and these loggers have some organisation, but there are now not many horse-powered farms, and we didn’t have a group or any organisation.

In September 2018, I attended a BOND Project training in Cordoba, Spain, where I learned some methodology on how to collaborate. So, in February 2019 I organised a meeting in the Czech Republic for anyone involved or interested in modern horse-powered farming.

I’ve been interested in this area for a long time and the Czech Republic is not so big, so I already had some phone numbers, emails and Facebook contacts of people with a connection to horse-powered farming. These people had contacts of their own, so the word spread.

Two months after the first meeting, we opened our farm for a field day. A few people brought their own horses and ploughs, so there was an opportunity for everybody who came to put their hand on a horse-drawn plough. We had a formal meeting focused on ploughing to share knowledge and experience, but the main outcome was people making connections between themselves.

In May 2019 we organised a meeting in a research centre in Prague to consider how farming with horses benefits soil health.

After the initial meeting in February 2019 we launched a Facebook group – it now has 800 members.

I think you have a desire to be connected with people facing the same challenges as you. I was hoping for 25 people to attend our first meeting in February – I couldn’t believe we ended up with 63! The hall was full.

“I think you have a desire to be connected with people facing the same challenges as you.”

We’ve not created a formal group so far. We are just organising meetings and activities and finding they are well attended.

Most of the horse-powered farmers are lonely tough guys from the mountains. They aren’t used to going out in public and getting to know others. They are used to competing against each other. I kept trying to stress how important collaboration is – working with rather than against each other. Some people were open, but others won’t change their mindset after just a few meetings. We will keep on trying and see what happens.

“Most of the horse-powered farmers are lonely tough guys from the mountains. They aren’t used to going out in public and getting to know others. They are used to competing against each other.”

I’ve found many farmers tend to be passive rather than active. They want someone external to solve their problems rather than work together to solve them themselves. They are happy to come to a big meeting but are more reluctant to do small amounts of collaboration on a regular basis. It takes a lot of our energy to persuade them to put their energy into something together.

Attracting young people into this kind of farming is hard. I’ve connected newer horse-power farmers with older, more experienced ones. I told them about the CSA (Community Supported Agriculture) model as I have found this a very helpful way to do this sort of farming.

To be able to work in the long term, we’ll need to create a bigger core group. We’ve not done that yet, it’s just a couple of us collaborating for now, and we’ll need a broader base if we are going to take this forward. I was not expecting to start an avalanche with things going fast from the beginning. We all have our own farms and commitments, working to promote collaboration is extra. We are giving time where we can with our focus being convincing others to put more energy in.

“I was not expecting to start an avalanche with things going fast from the beginning.”

People who do this sort of farming are usually very remote. It is good for them to have some connection and community, if they want it. Many people really appreciated the meetings.

I found out there are horse-powered farmers in the Czech Republic I didn’t know existed! I thought I knew everyone in this particular world, but through the events I organised I’ve met some farmers who have been doing it in the Czech Republic for years. Although I’d had an idea to bring organisation to the horse-powered farmers of my country, I never imagined I could stand up in front of them and talk and teach in this way. The training from the BOND project, gave me the confidence to do it.