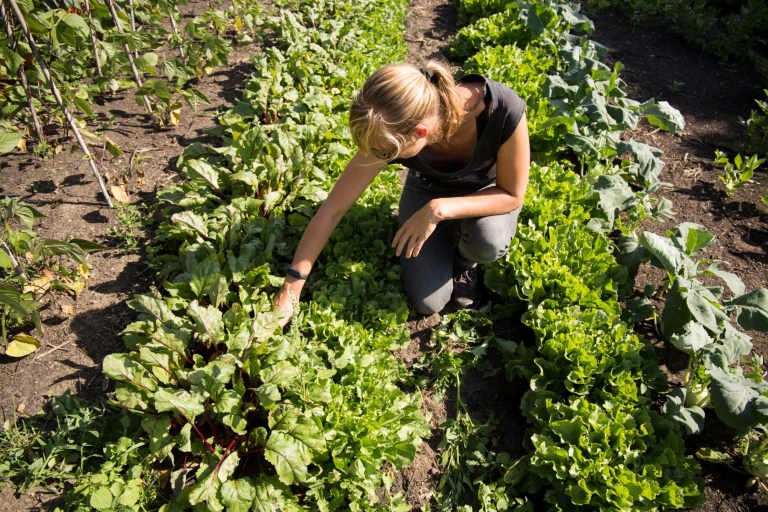 A federation of groups of agroecological and permaculture farmers who didn’t feel represented by existing farmers’ unions in agricultural debates in the Netherlands.

Name of the initiative? Federation of Agroecological Farmers

I’m from the city so as a child I didn’t really have a link to farming. I liked being outside in nature and when I was 8 or 9 I used to do a little gardening at a friend’s house or when my family visited the countryside at the weekend.

As a young adult living in Amsterdam, surrounded by pavements, I experimented with vertical gardening on my balcony. Tomatoes mostly.

After a local school was demolished, building plans got stuck, and the area turned into the neighbourhood garbage belt, myself and some others tidied up the space and started to use it as a community garden. Being an environmental and social issues activist you’re often against stuff so it was great to do something positive – and to show it can be fun. Transition is a movement helping people make a positive difference in their communities wherever they might be.

“When you start looking into climate change and environmental problems you soon arrive at agriculture: it is one of the first sectors to suffer from climate change but it’s also one of the main ones causing it.”

When you start looking into climate change and environmental problems you soon arrive at agriculture: it is one of the first sectors to suffer from climate change but it’s also one of the main ones causing it. Working in the community garden I got interested in permaculture – it seemed like a possible solution for the problems we encounter in agriculture. But it’s one thing presenting permaculture as a solution and another actually doing it, so I felt challenged to put my money where my mouth is and actually try to show it as a solution because at that time there weren’t any permaculture farms in the Netherlands.

So I took some permaculture courses and enrolled in agricultural school for two years.

In 2015 my now ex-partner and I moved to Brabant in the South to start a farm. We started a CSA (community supported agriculture) market garden called ‘Tuinderij de Voedselketen’ (The Food Chain) with members paying an amount per quarter to get a box with six vegetables every week. We’d meet them mostly through word of mouth and we had a pick-up point in a vegan shop. We had to keep it small (10-15 members) but even so it was a really hectic time. I was working three days a week, one from home and two commuting to Amsterdam. I was also going to school and doing an internship. In the summer months I was working full time in the garden. Some nights I was getting home at eight in the evening and grabbing the new plants that needed planting. We were there for two years but the owner wanted to sell, which we couldn’t afford, and we had to move. Our new location was nearby, in the middle of ‘het Groene Woud’ – a Nature Reserve.

We moved in 2017, so this is my third growing season there and I’ve been scaling up. I’ve been more active on social media. We now have forty customers and I’ve just quit my day job, so it has to work. Next year I need to grow to sixty. I love working in the fields surrounded by nature. Growing food for yourself and others is one of the most fulfilling things you can do. (It can be bad as well when it’s raining) I’m still running it with my ex-partner. I run the market garden and do the bookkeeping. He focuses on the perennials, fruit, deliveries and teaching permaculture to others.

Time management is difficult. When you start up the farm, it’s really hard work. Although I’d done training and internships it’s not the same as running the farm yourself. I was surprised at the amount of time you spend inside sat at the computer. You need to be motivated. You don’t become this type of farmer to get rich quick. You do it because you want to achieve something.

Last year I had burn out. It was a wake-up call for me – the reason I gave up my day job. A lot of new farmers burn up in the first two or three years because they are doing everything that an established farmer does but don’t yet have the customers so need to combine it with another source of income plus still have to learn a lot at the same time. You really need to watch your health because the work never ends.

“You really need to watch your health
because the work never ends.”

In 2018 Future Farmers put me forward to participate in the BOND project, which was a little bit of a mix-up, because they thought it would be about agroecology, and it was more about cooperation, but because of my background in organising activism it was actually a really good match.

After BOND’s Cordoba conference in September I came home and thought what’s next? The last couple of years there has been a rise of new farmers in the Netherlands and a big discussion around agriculture. It’s really hitting the boundaries of what’s possible. There have been huge farmer protests around the ammonia and nitrogen problems. Permits are being frozen. There are going to be harsh new rules and people are afraid. The Netherlands is at a crossroads – industrial farming one side and agroecology on the other. The farmers’ side of the debate is dominated by the big Farmer’s Union and we don’t feel represented by them. Although we had some ecological groups and associations, they were not connected and couldn’t give an alternative voice in the debate.

I contacted the people from Future Farmers and suggested to organise a meet up around cooperation of farmers organisations. We invited representatives of the different organisations to my farm. We worked together for the afternoon and in the evening shared food we’d brought around a fire. We call it ‘BoerenVuur’ – Farmers’ Fire. It’s a literal fire, but also represents our shared passion for farming. While everyone was talking and eating and getting to know each other we came up with the idea of forming a federation where all these different groups are represented with a common voice over common issues. Everyone was really on the same level. It was one of those moments where you bring something up at the right time – everyone was thinking the same thing but not sure what to do about it.

“It was one of those moments where you bring something up at the right time – everyone was thinking the same thing but not sure what to do about it.”

We had another meet up in January 2019 to put on a conference in March. It was short notice and we weren’t sure we’d get enough people. But we actually had to close the registration two weeks before the event because 100 had already signed up. The six associations represented all agreed to join a new Federation of Agroecological Farmers.

We’re not yet registered: we’re working on that now and thinking about structure and who can become a member. BOND’s Training the Trainers was really useful for this because it was about assessment of organisations. It’s the boring part, but you need to get the organisation right from the beginning.

“As a federation you get a bigger voice. We promote ‘Boerenlandbouw’ – agriculture run by farmers. Our message is to stop treating farms like factories. “

As a federation you get a bigger voice. We promote ‘Boerenlandbouw’ – agriculture run by farmers. Our message is to stop treating farms like factories. Bring it back to human scale. Working on a smaller scale you have a bigger connection with your surroundings.

While farmers drove their tractors in protest to The Hague, we wrote two opinion pieces about working towards a sustainable system change that were printed in national newspapers.

I dream there will be a shift in the discussion around farming – towards agroecology – showing it’s a good solution for the environment and the farmers. It doesn’t have to be Nature against farmers, but Nature with the farmers.
Although it’s been hard work, I don’t think I’d have done things differently. If you know the challenges you are about to face, you might not do it, but I’m glad I’m where I am. Learning by trial is often the only way to learn.

Pioneers often have big egos – they have passion, but they are primarily promoting their own project. You need to strengthen the base – you need to be able to cooperate – that’s what the Federation does. It’s about being willing to find a solution that is good for everyone – appreciating the added value of all these people working together. You might think ‘I would have done it differently’, but we are a big group and you have to find the strength in what everyone wants and often the end result is better than what you came up with on your own.

“Running a farm and being part of the Federation is working towards another solution. We can make change. We can make ourselves heard.”

Activism can give you a feeling of hopelessness and powerlessness when you’re up against big companies, pointing out problems. Running a farm and being part of the Federation is working towards another solution. We can make change. We can make ourselves heard.

Each country has their own problems and issues, but the feeling of being powerless you can see everywhere. Cooperation gives you sense of not being alone and of taking back control.