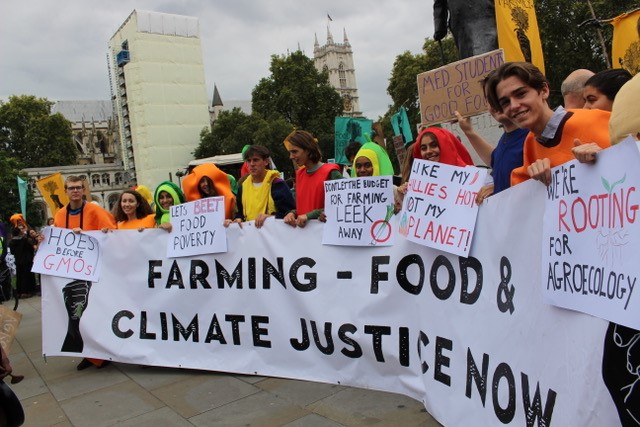 A union of farmers, growers, foresters and land–based workers creating a better food and land–use system, building skills and knowledge in agroecology, working for food sovereignty, sustainable forestry and the right to food.

Name of the initiative? Landworkers’ Alliance

I started as a new entrant to farming 20 years ago, with no money, little governmental support and lots of barriers. During a working group at a Food Sovereignty gathering in 2012, Adam Payne, myself, and Olly Rodker, realised there wasn’t a UK farmer’s union that represented the interests of smaller-scale farms, agroecological food perspectives, or the ideas of food sovereignty. Although the existing union had a very broad membership – including smaller farms – it never seemed to represent their interests on a policy level, instead holding positions of pro-GM, technology and export markets. We felt there needed to be an alternative farmers’ union representing agroecology with more democracy in the decision making.

It was important for us to be part of Via Campesina – there was no UK branch of that. The three of us wrote introduction to our ideas for a farmers union and emailed it around asking if anyone was interested. Twelve people replied, so we held a meeting, and we needed a board of twelve, so we just elected everybody there! The Landworkers’ Alliance (LWA). We started with a few policy positions amongst ourselves and did a demonstration in front of the agriculture department bringing food from local farmers’ markets, trying to lure them out of the building and have some fun – we wanted to approach it with a sense of humour. We launched a policy document there. Our perspective started attracting others, so we created a membership and formed a bank account. As we put on gatherings, and via word of mouth, LWA’s membership grew.

“At first, you’re a little marginal, it takes time to get the policy lobbying work started when you are talking on an equal level to big organisations with policy staff. “

At first, you’re a little marginal, it takes time to get the policy lobbying work started when you are talking on an equal level to big organisations with policy staff. Ed Hamer and I were the first policy team and we analysed the policy contexts to figure out where the decision-making was within the agricultural department and which specific politicians to approach. We sent them all letters explaining who we were and what we represented and inviting them to meet with us. Through this we found our allies and who were less open. We asked to be put on their mailing lists for consultations and for them to make sure to send us invitations to relevant roundtables and committees. That’s really paid off over the years, as well as our farmers’ market banquets. We’ve been very central to the recent agricultural bill debate and we have very useful contacts in the government and the civil service who promote our policies.

As a union we do three different things. Firstly, solidarity – we offer support and networks for our members. That’s the core of our activity – organising regional and local groups to meet, share knowledge and help each other out. We do that on a national level as well. We try to organise a good number of physical gatherings so we can meet and have fun together. Secondly, we offer training – to new entrant farmers, and to existing farmers to encourage them towards agroecology. Finally, we try to influence policy to make things better for our farming and forestry union members, represent the needs of new entrants to agriculture, and influence the wider governmental context as well as a local and regional level.

“Our policy team makes sure all our policy positions come from what the members actually want. We hold a lot of workshops and policy roundtables where we explain what the current policy proposals mean and get people to input based on their own experience.”

Our policy team makes sure all our policy positions come from what the members actually want. We hold a lot of workshops and policy roundtables where we explain what the current policy proposals mean and get people to input based on their own experience.

It was a ripe time for organising an agroecological farmers union in the UK because people were noticing that the small-farm agroecological perspective wasn’t being represented by anyone. There is more momentum because of the climate crisis, people care about economic recovery and green jobs.

Our social media membership is now growing rapidly, and we have great sign up for our campaigns compared to some of the major NGOs, but that’s because we’ve done the groundwork. All our initial members spent a lot of time speaking to people at local clubs, on panels, at festivals and one-to-one explaining why it’s important to join together.

“All our initial members spent a lot of time speaking to people at local clubs, on panels, at festivals and one-to-one explaining why it’s important to join together.”

We’ve kept the membership fee very low – £25 for a year – to make it accessible to everyone and to encourage people to join so we can do more. We also make our gatherings super fun! We always have a dance, so you get a sense you’re part of a social movement, not just on an email campaign list.

“We also make our gatherings super fun! We always have a dance, so you get a sense you’re part of a social movement, not just on an email campaign list.”

The LWA is one of the most functional organisations I’ve ever been a part of, though we have to spend some time trying to get ahold of people who are often in the field and hard to reach in the busy seasons. Lots of us are active farmers, who do it because we believe in it and want to change the world through it. Farmers are busy, but that means they are internally motivated, and many don’t have time for personal politics. We’ve had very few difficult personal dynamics, but we are a young union (8 years old) so perhaps we are still in the honeymoon period? From the start we’ve built cohesion and identity – spending time chatting at the pub together, nurturing human connections and building a common purpose.

“From the start we’ve built cohesion and identity – spending time chatting at the pub together, nurturing human connections and building a common purpose.”

We’ve struggled to build up enough funding to do everything we want to do – at the beginning there was no funding for staff. Everything was voluntary and because we are farmers, it was hard to keep consistency throughout the year – during planting season, we couldn’t give time to the union. We’ve done lots of fundraising. A couple of years ago we’d completely used up all our finance and we had to do a Crowdfunder just to pay our staff. But now we’re finding funders are approaching us, which is amazing.

We still want to be a grassroots organisation rather than an NGO led by a core staff. Balance is important. Our membership is just over 1000 but we have 9000 on our mailing list so one of our next focuses will be to encourage them to join.

“You have to start somewhere otherwise you never get started.”

When you start something new, there can be hesitancy, but If you feel something needs to be done, my advice is start with a tiny group, and stay small if you need to. Maybe everyone is a little weak, everyone is a little busy, but you have to get on with it and try. You have to start somewhere otherwise you never get started. Start with getting people together and working together. It’s good to have a fairly clear vision before you gather too many people. For us, joining the Via Campesina meant we had a clear ideological standpoint to start from. We remember it’s not just about policy, it’s not just about technical stuff or social media presence, it’s about people.

I’m busier than ever, but finally after years and years of campaigning on a voluntary level, I actually get paid. That allows me the time to work consistently on the campaigns. I’ve also had great opportunities to travel internationally with Via Campesina and make international connections.

I am proud to think that, even a little bit, the position of small-family farms has improved in the UK, because that position has declined drastically over the last few decades. Last week we got two government contracts to carry out some tests and trials on some small farms. That’s groundbreaking for us – supporting farms below 5 ha that can’t normally get financial assistance. It feels like a concrete change. We are making a difference and will continue to try- even if progress is slow!