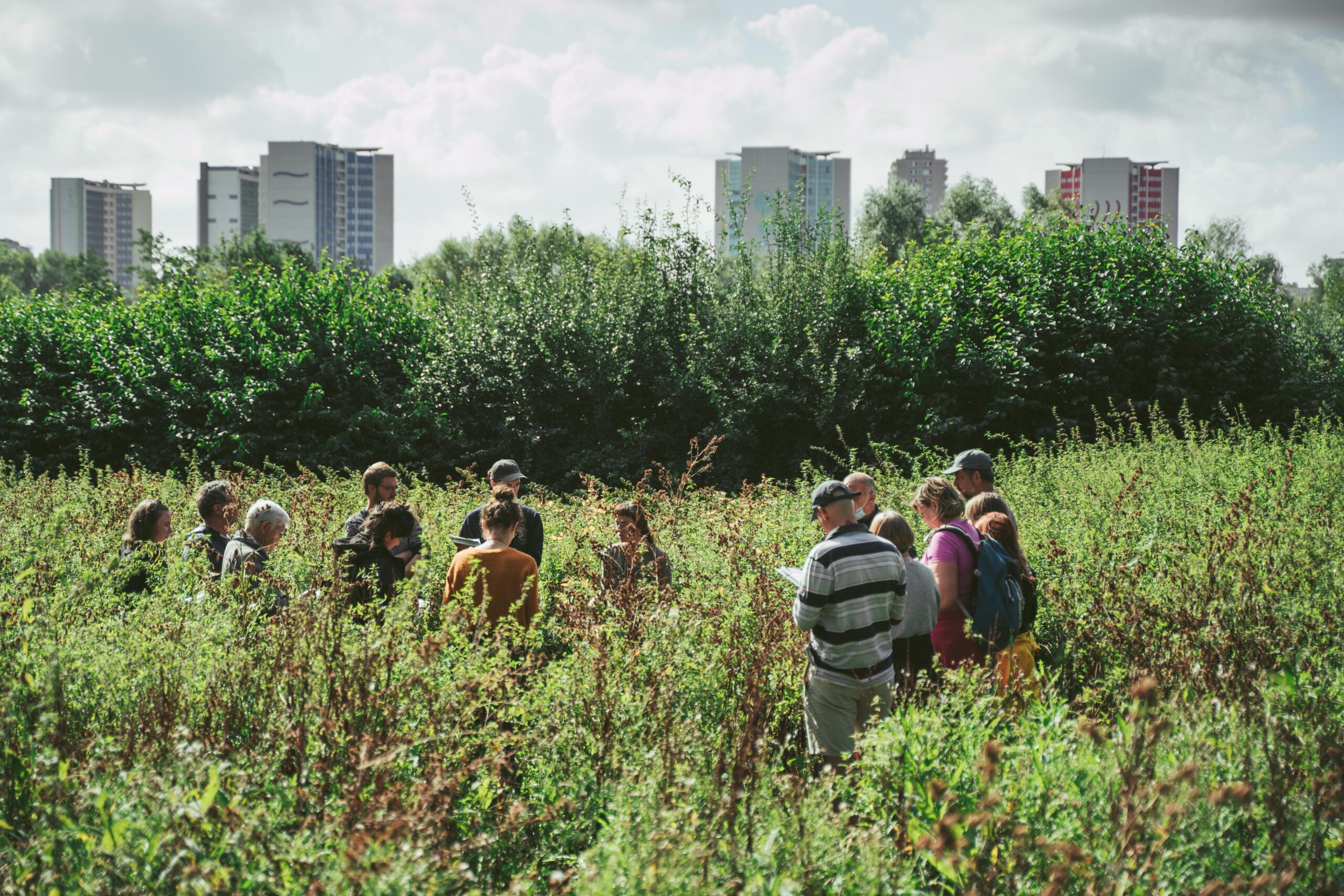 An NGO whose mission is to free land from speculation and render it for the common good. We become owners or managers of land that we rent to farmers who will farm agroecologically, ensuring the land remains designated farmland. We are inspired by Elinor Ostrom when it comes to the commons.

Name of the initiative? Land-in-Sight (Terre-en-Vue)

In Belgium farmers typically own 30% of the land they farm and rent the rest. Often when a landowner dies, the beneficiary chooses to sell. So, the farmer may lose a few hectares which means they no longer have enough to be autonomous, it is harder to be profitable, so they stop farming. Price of land is a real problem and there is no real land policy or land policy institutions in Belgium. There were 43 farms disappearing every week. People realised if we do nothing now, there will be only a handful of big farms in a few years’ time.

In 2012 a farmer in the Ardennes lost 5 hectares and was talking to a friend about having to give up his farm. At the same time, a network of about 15 NGOs and cooperative companies were reflecting on setting up an initiative that would free land from speculation to help farmers continue farming there organically. The friend got in contact with one of the members of this reflection group and they started working together. They were 20 citizens with 70 000 euros but no idea how to buy farmland. Our cooperative company very quickly became operational in a very pragmatic way: we bought this land for the farmer and now rent it to him We have since helped 15 other farms.

“In Belgium it isn’t difficult to set up an NGO or a cooperative company. The biggest challenge is social governance…”

In Belgium it isn’t difficult to set up an NGO or a cooperative company. The biggest challenge is social governance – how to mobilise citizens, how to convince them to invest. We wrote our statues with eighty people; all gave their opinion on every article. It was a long process, but it gave a lot of legitimacy to the statutes. You can do it on your own – it’s quite simple – if you do it with a large group, it becomes more complex, but you gain legitimacy, and all the rules are respected. We edit our leasing contracts together with our farmers, so everyone respects their content. We have a basic rule to work together to make rules with those who will have to apply them. It may explain why we are a little bit slow in our growth.

“You can do it on your own – it’s quite simple – if you do it with a large group, it becomes more complex, but you gain legitimacy, and all the rules are respected.”

A big challenge in a country where there is a lot of speculation is how not to contribute to it. Recently we had an opportunity to buy some free land (not occupied by a farmer and no lease contract). It was a long negotiation process, but eventually the owner decided to sell to us rather than others who were offering more. Terre-en-Vue could go faster if we put more money on the table, but then we would just be contributing to speculation.

We are moving into an acceleration phase now. There are more and more farmers coming to us – bigger farms as well realise they might have to reduce in size because of the effects of climate change. If we were to accelerate, we must consider how coherent we can remain. If we become more commercial to bring in more resources, we risk moving away from our fundamental citizen-driven environment and philosophy.

“The human factor in collective projects is very important so the fact we’ve taken care of that since the very start is probably key to our success.”

We’ve chosen to work with a different form of governance in our team, inspired by sociocracy, collective intelligence, non-violent communication. The human factor in collective projects is very important so the fact we’ve taken care of that since the very start is probably key to our success.

“I think it’s very important to talk to your ‘opponents’…”

One of the first things we did was go to syndicates that represent conventional farmers and talked to them and confronted their ideas. I think it’s very important to talk to your ‘opponents’ – those focused on financial rather than environmental or social profit. Without any shame we explained our model, recognised its limits and demonstrated the limits of theirs in a very objective, neutral, non-judgemental way. It’s important not to be afraid to talk loud and to go to actors who may not be your first collaborators.

“It’s important not to be afraid to talk loud and to go to actors who may not be your first collaborators.”

We also looked at what already existed. We went to France, to England, to Germany and looked at existing models and tried to learn from good and bad experiences.

Every time we buy land, we set up a local group of on average 70 shareholders gathering about 150 000 euros. They are very autonomous – being responsible for getting the money and supporting the farmer is a key factor in our success and is typical of our initiative. People tend not to withdraw their money from the company even though they don’t have any financial interest. People were increasingly concerned about keeping their money in banks and liked our solution to benefit others. They don’t gain money, but they don’t lose money either and they have high social and environmental gain.

We encourage all farmers to be extremely transparent, to share what they’ve been able to do because of the intervention of Terre-en-Vue. The first person we supported was part-time farmer and part-time construction worker. When we invested in his farm, he didn’t have to have to buy the land and could liberate capital to build a new barn and a little kiosk to sell the meat he produced. Since opening the kiosk, and the publicity we gave him, his sales have exploded, and he is now a full-time farmer which he’d been dreaming of for a long time but didn’t think he’d ever be able to do.

“…proximity between farmers and shareholders has been an objective from the very start, and it works.”

One of our farmers recently told me on the first day of the COVID-19 quarantine a Terre-en-vue shareholder called him and said ‘look, if ever you need financial help to get through this phase, don’t call the bank, call me. I will wire it to you. I’d like you to pay me back without any interest, only when you can.’ This proximity between farmers and shareholders has been an objective from the very start, and it works. If citizens take care of their farmers, the farmers can take care of their farms in a proper way.

We prefer to use the term agroecological rather than organic because the certification tends to be an obstacle. We want to encourage all farmers to be organic, but we also want to be open. Our NGO depends on subsidies and it would be harder for the Ministry to support us if we only supported a small section of farmers such as those certified organic. The biggest motivation not to limit ourselves to only certified organic farming is we don’t want to create a cleavage between organic farmers and conventional farmers who may want to start farming differently. This choice has given us a certain flexibility and non-judgement.

“The biggest motivation not to limit ourselves to only certified organic farming is we don’t want to create a cleavage between organic farmers and conventional farmers who may want to start farming differently.”

We have more or less eleven sources of finance. Our economic model is still very dependent on subsidies, so we are beginning to ask ourselves questions about that. We want to do lobby work and being dependent on the government is not so easy. After having set up a cooperative company and an NGO we also created a foundation. It’s an important structure because it helps us balance subsidies, services and donations.

For the last five years we’ve been supported by the European Fund of Rural Development and this has allowed us to collaborate with a lot of public institutions. We’ve become a very legitimate actor in Brussels. We are approached by institutions asking us what to do with their land or to take it into management. It has allowed us to work with actors that are not political. The Belgian government couldn’t give us finance to cooperate with one of the agencies because that would have been political and difficult to defend. The neutrality that you gain through European funding is a key factor in transition projects.

“The neutrality that you gain through European funding is a key factor in transition projects.”

We have deliberately never related to any political party. When we’re invited to contribute to lectures organised by a political actor, either we decline, or we are very specific about the fact we are not linked to them.

“Whatever the context, you need a broad group of people who support your idea – not a niche group.”

When you start a project like this it’s important to adapt to local conditions. Whatever the context, you need a broad group of people who support your idea – not a niche group. This offers a perception of neutrality, legitimacy and reality. As soon as you’re classified as a little group of punks who want to do something different, it’ll be hard to get rid of that image. It’s important to consider image you will attain once you get public.

We’ve been active since 2017 in the development of Urban agriculture. Almost one third of our shareholders are now from the city with no connection to farming, so not only are we closing the gap between citizen and farmer but also between the city and the countryside.

“Maybe you have to think and act small and local – maybe not. It’s important to dare to ask yourself that question.”

In eight years, we haven’t fundamentally changed the agricultural situation in Belgium and sometimes I feel that we should. With our experience and expertise, it’s important to ask how we can contribute in the most efficient way to a transition. Maybe you have to think and act small and local – maybe not. It’s important to dare to ask yourself that question.

10 elements of Agroecology campaign in Hungary