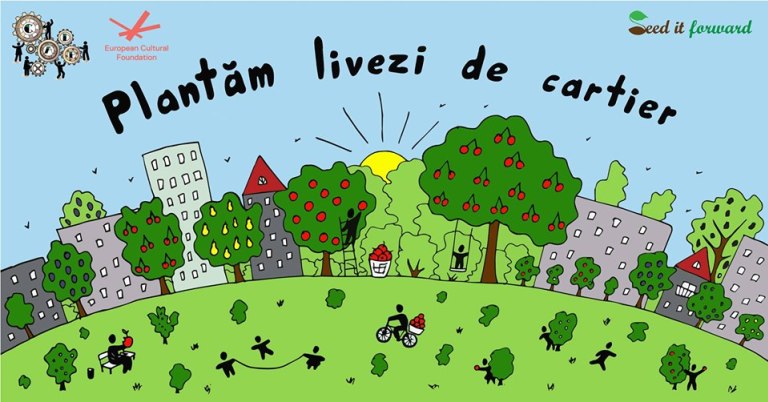 Name of the initiative? The Neighbourhood Orchard Project

I moved from my birth town in Cimislia to Chisinau six years ago to study anthropology at the State University, and last year I became very curious about how cities can transform themselves to cope with the growing climatic crisis – about how the municipality, the civil society and other actors might work together for resilience particularly food resilience: how the city can produce at least part of its own food and cooperate with nearby farmers so it isn’t totally dependent on global supply chains. I was frustrated because there was no public discussion about it in my country. Chisinau isn’t really liveable – 70% of the constructed infrastructure hasn’t been renovated since the Soviet period and everything since 1991 was built without any thought to infrastructure or ecosystems. You don’t feel like going out for a walk. All our public spaces are copy-pasted structures. With only copy-pasted public space, the interactions between people are also somehow copy-pasted. They don’t encourage creativity. We now have several islands of skyscrapers that are enclosed on themselves like urban ghettos, generating traffic and not connected to the social and cultural functions of the city. I want it to be a liveable city, an eatable city. Eatable places in our public gardens could contribute to social cohesion, so, in October 2019, our organisation ‘Active Communities for Participatory Democracy in the City’ together with ‘Seed It Forward’ launched a fruitful tree campaign in the city.

In 2018 I received a small research and development grant from the European Cultural Foundation for the research project ‘Urban food resilience: models of interventions in Posta Veche’. The grant had a small amount of money for launching the study. When I wrote the application I thought a conference should work to present the findings of the study, but after a year of working with the topic of urban food resilience I knew that a conference wouldn’t resonate with people in the same way as a lasting action so I asked if I could use the money for a Neighbourhood Orchard Project instead. Via Facebook, we invited Chișinău citizens to apply to plant 5-30 fruitful trees or bushes around their block or in a public space near their house. The only condition was they would not plant trees for only themselves but for the common good. We had around 30 applications and from these we selected 22.

We invited successful applicants to a big planting event in a public park in Posta Veche to learn together how to plant trees properly: things like trimming the roots before planting, digging a deep and spacious hole for the roots to fit, covering the tree with earth only several inches below the grafting point, planting trees 4-5m apart, etc. Only after attending the workshop were the participants ready to organise their own plantings in their neighbourhood.

“I knew that a conference wouldn’t resonate with people in the same way as a lasting action so I asked if I could use the money for a Neighbourhood Orchard Project instead.”

We had applications from two schools and one asylum for dogs. The rest were courtyards between blocks of flats, 20 across the city. We had rich neighbourhoods and poor neighbourhoods, geographically different.

Together with the community we learned we could start a public discussion around transforming our city with minimal resources. We can look at the city as something we can develop together rather than wait for City Hall or other forces to create a space we want to live in. It’s really not expensive to buy 10 fruitful trees and plant them with your community and to see how they grow. Different groups had lots of reasons for wanting to be involved, but the action was one and it was very simple.

“Together with the community we learned we could start a public discussion around transforming our city with minimal resources. We can look at the city as something we can develop together rather than wait for City Hall or other forces to create a space we want to live in.”

Initially people were skeptical about planting in the city. They said, ‘if you want to plant fruit, you should go to the countryside – the city is too polluted to produce food.’ They complained ‘the fruit will fall and make the city dirty.’ We wrote several targeted articles explaining that if we didn’t plant along the roads but used the blocks of flats as screens to the vehicle pollution, the fruit would be edible. We explained that planting trees, and the drop of the few fruits that weren’t eaten would improve the soil, and that if the soil was contaminated, we could plant in pots. Fallen fruit will biodegrade, unlike the plastic litter that is dropped. Our articles and project gained media attention and were covered by radio and television.

Different neighbourhoods wanted different things. Not everybody wanted trees – one group wanted to plant an edible fence of raspberry bushes around their block. We listened to them.

It’s still very early, but growing fruit trees not only provides food, it also changes the landscape. It makes people want to leave their flat and go out into the public spaces. Some of the older people who planted trees told us they feel utterly abandoned. They don’t have places to meet each other: all the public infrastructure that exists is for young people. By planting these trees with schools, they could share their experiences with the young. They felt included. Though they are getting older, they feel they have invested in these trees that are just starting to grow and will live long after they will.

“It’s still very early, but growing fruit trees not only provides food, it also changes the landscape. It makes people want to leave their flat and go out into the public spaces.”

Developers can’t build and cars can’t park where the trees are planted. It protects the space. Adults can spend time with their children talking about ecological consciousness even though they live in an urban environment. Urban children are no longer alienated from nature.