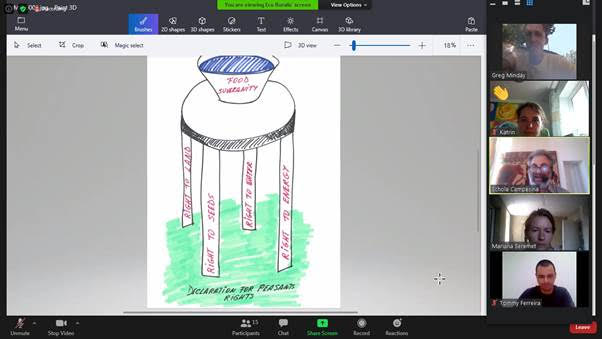 The third workshop of BOND Young Farmers for the Future’s Forum was introduced this afternoon by Mariana (Moldova) and Greg (France) with a drawing they created
and shared, making use of a metaphor that underlines the necessity for food to be considered a common good. Mariana and Greg also brought up the need for an increased knowledge of regulations in order to be able to rely on them in their struggles.

Other topical concerns were raised by the participants while they introduced themselves. Yeva (Netherlands) brought to light the question of farming without exploiting resources and Alina (Denmark) mentioned the issue for farmers to practice farming without having their own land.

The workshop started with a presentation by today’s expert, Ramona Duminicioiu, who works for the European Coordination of Via Campesina and is member of Eco Ruralis (Romania). She presented the difference between rights and access and between human rights and corporation rights before explaining the process of the adoption of the UN Declaration for the Rights of Peasants and Other People Working in Rural Areas (UNDROP) and the novelties it contains, especially in recognising the right to natural resources.
Ramona also presented the minimum requirements for respecting peasants’ rights to land and rights to seeds along with other instruments to protect peasants rights.
Greg brought up the difficulty for peasants to apply the UNDROP and make good use of it, followed by Tommy (Portugal) who expressed the fact that peasants do not know enough about their rights and that policies need to go more to the people.
Mariana added that in Moldova, people who work in the sector often do not think that there is a need for Declarations like UNDROP.
Yeva and Alina commented on the fact that states should be more active at recognising human rights and should make human rights come before corporate rights in order to stop human rights abuse and exploitation.
Franjo (Croatia) highlighted the worsening quality of seeds in the past ten years.

Six main clusters emerged from the first part of the discussion. Participants agreed to work together on drafting policy recommendations regarding the recognition of their rights as peasants and their right to land, seeds and water. They will also be working together on how to raise awareness among peasants and in front of the state on the UNDROP in order to be able to put it in practice, and how to use the UNDROP as a reference for food and agriculture policies and shift from a trade approach to a rights approach.

This was the third of four thematic workshops hosted by Eco Ruralis for The BONDProject.

Developing markets for the next generation of farmers

How can young farmers work together to innovate and share knowledge creatively?